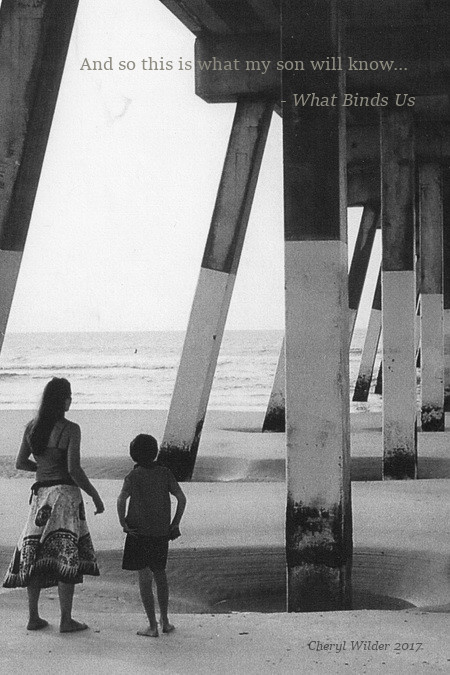 When I created this website there was a brief explanation on the home page on how I came up with the name, BornWilder. You’re likely thinking it’s pretty obvious since I was given the last name Wilder at birth. But there was more to it.

As I re-designed the site, I took the story (and it’s accompanying image) off the home page and squirreled them away for a future blog post. The photo now graces the cover of my first chapbook, What Binds Us. It is one of my favorite images as it captures my first born and I together, facing whatever lies before us. Our relationship was such, though I imagine he never knew just how alike we were in our attempt to understand the world.

My chapbook was just released, carrying many poems that span this time in my life. It seems appropriate to share this story again now.

In my late twenties I found myself re-establishing my identity. Not in the usual sense of graduating college and becoming an adult with real-world bills, finding a job, a loving partner and a mortgage. As I searched for this identity I did so on the way to taking my five-year-old son to kindergarten, between classes at the community college and before my night shifts at the bar.

During a conversation with a transcontinental friend, he told me an anecdote about a friend of his, named Free. Free liked to emphasize that he was, without doubt, born Free. At the time, I still legally held my ex-husband’s last name. For weeks I admired how Free’s name allowed him to re-establish his identity, as needed. No matter the obstacle or joy that changed his life, he could always fall back on being Free.

In the throngs of living as a single parent, I felt an added pressure to establish a strong foundation for both my son’s and my future. This included basic parental teachings like right from wrong, properly brushing his teeth, and the rewards of patience, but it also meant that I needed to cultivate an identity as a woman separate from my role as a mother.

As a single parent who cooks and cleans by herself, disciplines, plays and teaches the child by herself, and financially supports her and her son by herself, there is not a lot of time or energy for herself. So, I took a different route, and though it meant not having the same name as my son, I reclaimed my maiden name.

Changes like this cannot be measured in paychecks or statistical data or even that our lights were never turned off by the electric company. This simple change modified how I perceived myself and myself in the world.

Reclaiming my name provided me, as an individual, a previously unrecognized strength in self.

At a time when most mothers, married or unmarried, feel a loss of identity to their young child, and at an age when most twenty-something’s sense an intrinsic shift in the way they perceive the future, I emerged a more peaceful and settled woman. Not that anything in my life had inherently become easier. But for the first time, I accepted and embraced, no matter what lie ahead in life, the honest nature of my personal drive. And that I was, indeed, born Wilder.

let’s make it easy. receive blog posts in your email!